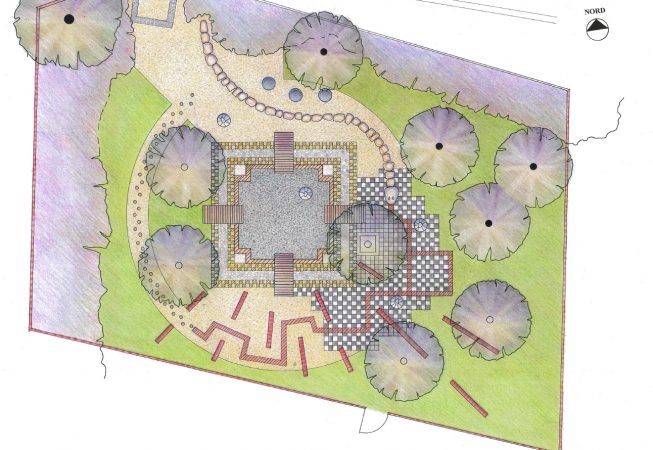 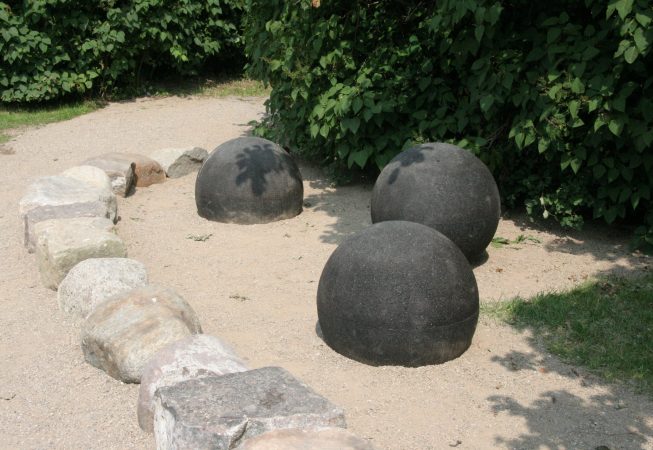 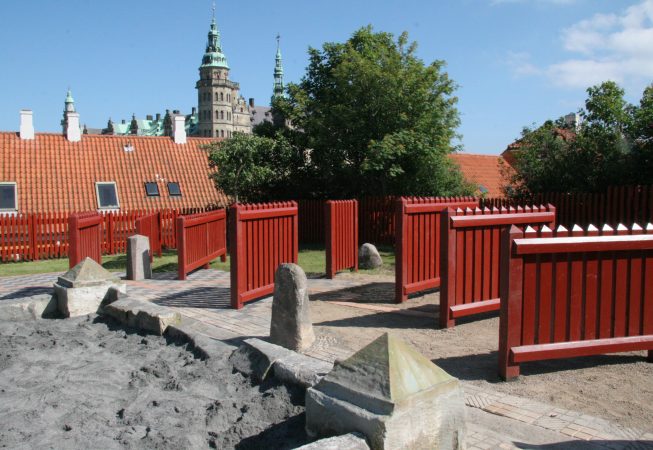 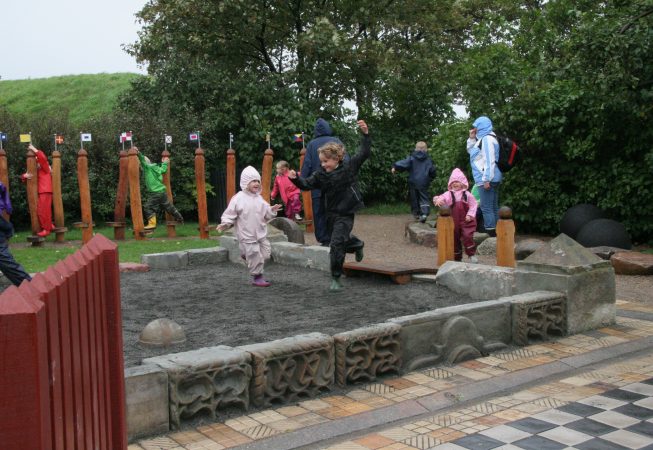 A PLAYGROUND FOR PRINCES, PRINCESSES AND ALL YOUNG AND PLAYFUL CHILDREN

“Oh look! Old knight’s flags!“ An enthusiastic mother is pointing at the small, colorful flags that adorn the tops of 26 stilt poles. But the flags are in fact signal flags used in shipping. They should remind us that we are at the entrance to the Sound with Kronborg Castle on starboard. And the sandpit that is not really a sandpit, but a “powder pit” with black sand from Iceland, refers to the fortress of Kronborg Castle, where gunpowder and cannons in ancient days were important ingredients in the defense work. The black and white checkered surface refers to the beautiful floor in the Ballroom inside the castle. It’s all come together to hint the story of the life in and around Kronborg for soldiers and seamen and for kings, queens, princes and princesses.

Kronborg is particularly known for its four stories of power, powerlessness and myths: Kronborg Castle as a fortress, Kronborg as King Frederik II’s famous renaissance castle and as the framework around Shakespeare’s Tragedy of Hamlet, Prince of Denmark. Finally, Kronborg is known for Holger the Dane, who sits in the casemates underneath the castle. According to the legend the stone figure will turn into flesh and blood, when the kingdom is threatened by a foreign enemy, and Holger the Dane will rise up to defend his country.

Both Holger, Prince Hamlet, the King and the Queen are to be experienced implicit on the playground in the shape of four beautiful, old granite bollards. There is not one conclusive explanation saying who is who. It is entirely up to the children’s imagination to decide and they can also choose to provide the granite blocks with a completely different meaning. Nothing is clearly defined beforehand. At the bottom of the gunpowder pit old building fragments are hidden. The children can dig down the black sand to find them and be surprised. It arouses curiosity and invites children to go hunting for other secret tracks.

HIGH CLASS RECYCLING
The playground design incorporates a special path that is a bit like a maze. It consists of a series of rough stones – named the Kronborg Snake – which is connected to a line of red tiles and the 26 stilt poles. The playground is largely constructed of recycled stones. First of all old sandstones, which over the years have been taken down from Kronborg’s facade where they have been replaced with new carved sandstones, secondly of ancient granite stones and bollards, and finally by small, old pavement tiles from Elsinore. The Dance Floor is made of new black and white square tiles that are decorated with the red line of tiles. It was part of the concept that the play area should be built in simple materials with high durability and with elements that ages beautifully due to the children’s wear and tear.

A GARDEN
The playground is located on Queen Louise’s Bastion in a former small garden fenced with a red picket fence and with green grass and old fragrant Lilacs and fruit trees. This theme has been preserved and strengthened. At the same time new elements have been added that give the space more play and narrative value. That may stimulate children’s curiosity so that they would want to explore the historic monument and the heritage of Kronborg Castle more deeply. The playground’s scale is primarily targeted toddlers and preschool children, but older children are welcome as well.
Activities like running, jumping, crawling, climbing, digging, exploring and get a feeling of a unique play space is integrated in the design.

THE GOOD EXPERIENCE
The goal of the play area is to provide children and adults a great overall experience when visiting Kronborg. Implicit is the visit to the palace and fortress, but with the introduction of multiple play activities, : The Agency for Palaces and Cultural Properties wish to support the total experience of a visit.

Kronborg Castle was inscribed on UNESCO’s List of World Heritage sites in 2000.