An icon for natural playgrounds 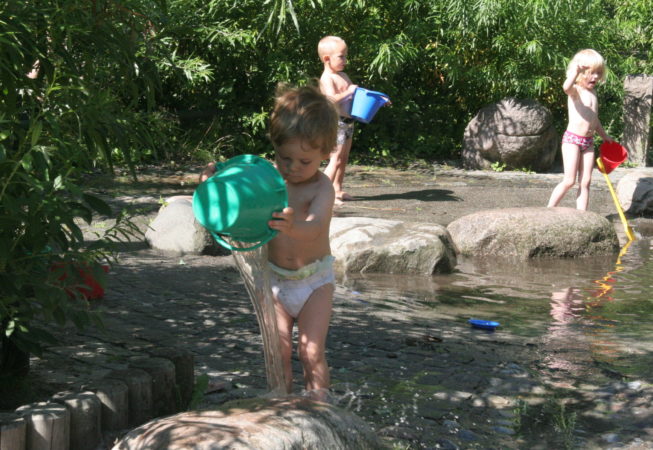 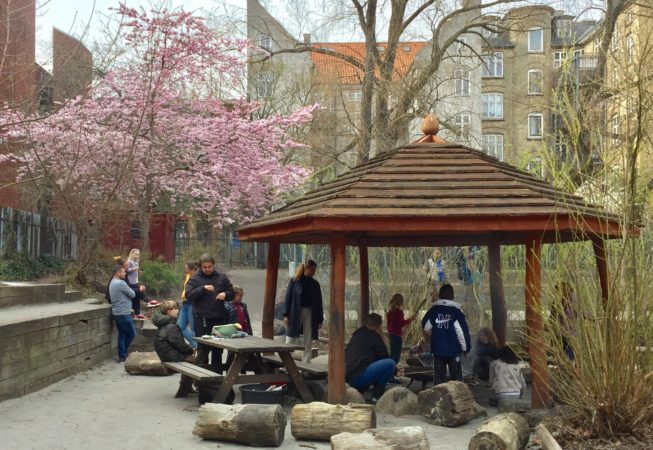 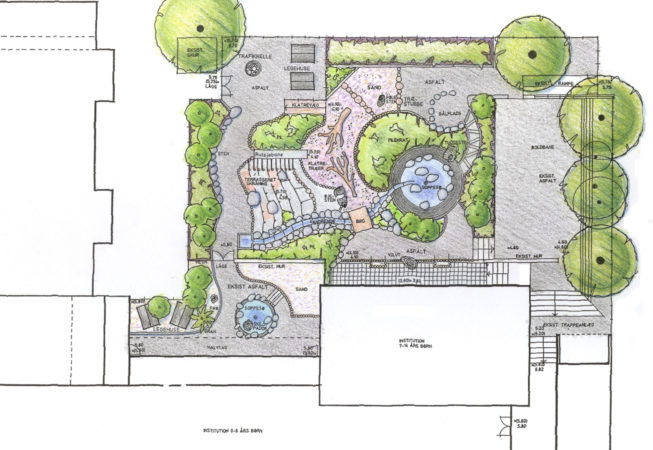 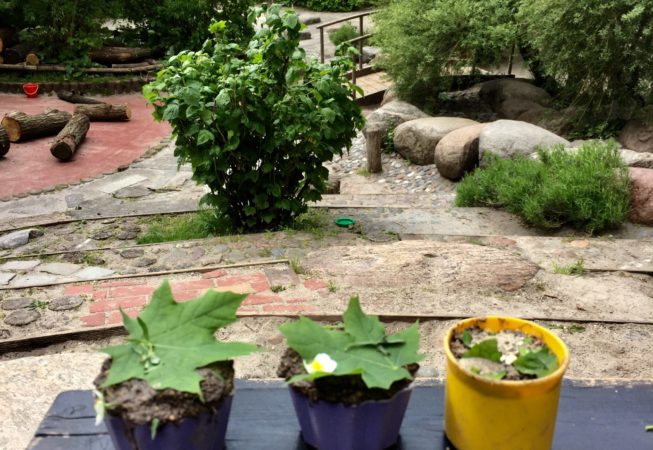 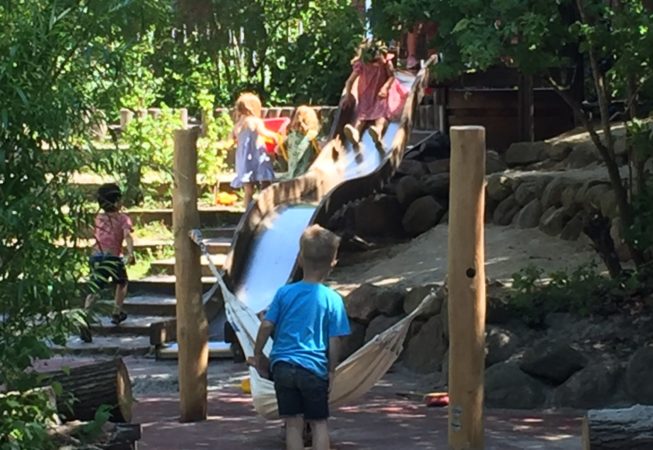 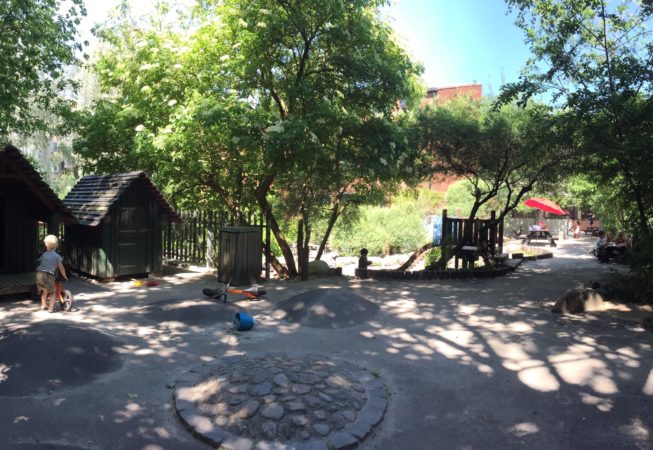 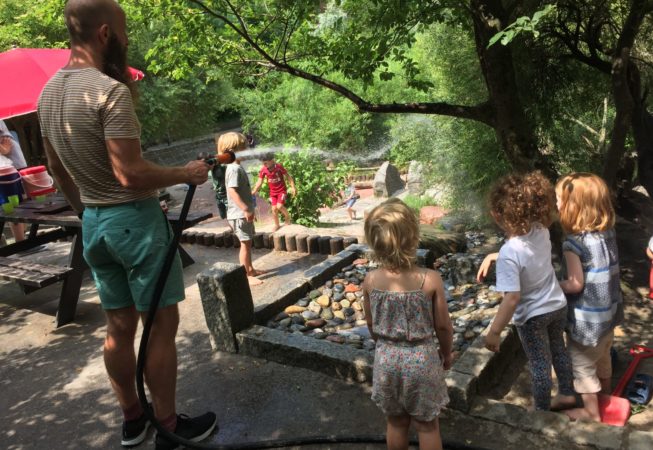 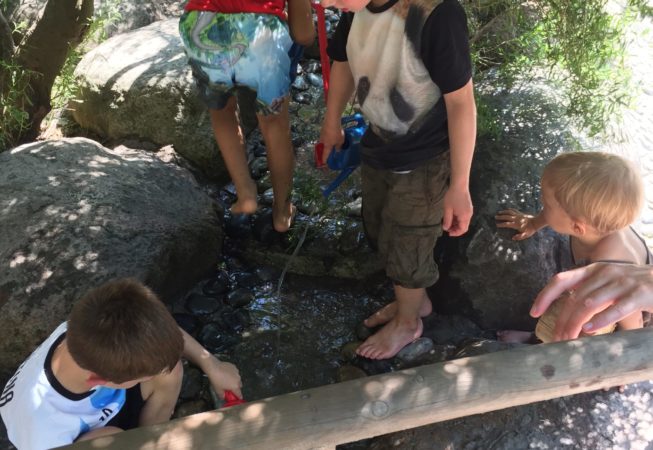 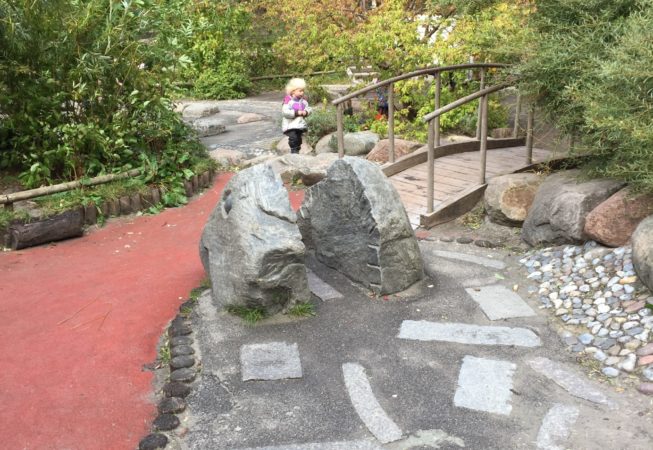 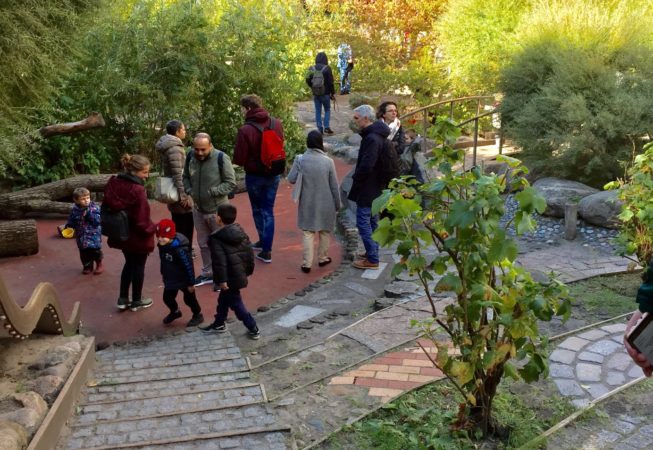 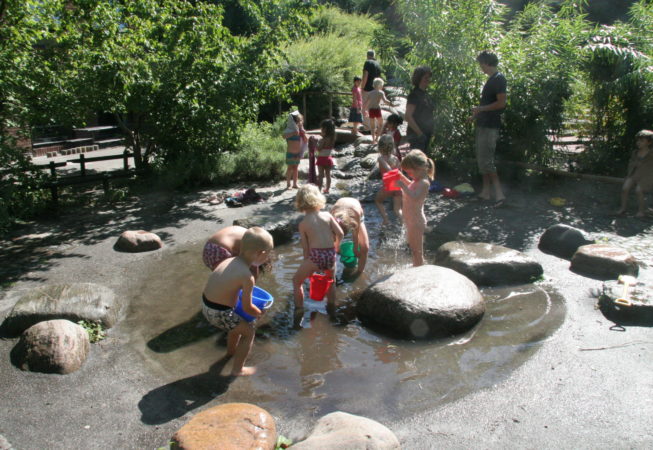 Murergaarden Daycare Centre and After School Club in Copenhagen has a very little playground. The center serves 64 children aged zero to six years old and 100 children aged seven to fourteen. The space is located in a residential area and is used outside opening hours by local children and young people, so it is subject to a lot of wear and tear.

The former playground from the 1970s was completely rundown and had to be renovated. The social services decided to hold a workshop for the leaders of childcare centers in Copenhagen. They were asked to put forward their ideas for the ‘perfect’ playground.

Landscape architect Helle Nebelong’s job was to collate the many suggestions and, on the basis of these, design a new playground. The result was a little oasis with organically shaped plantings, which complemented the massive surfaces of the surrounding buildings. The higher and lower levels are connected by a terraced slope that has become a central feature in the playground. At the bottom of the slope is a wide, bending sandpit bordered by bits of wooden palisades and tree stumps and stones, which are all good to practice balancing. The little paddling pool is tarmacked and connected to a channel and spring on the upper part of the playground. In the summer a fire-hose is used to fill the steps with water, which falls down to the paddling pool. It takes a couple of hours to fill and then the water is turned off and allowed to stay in the pool until it is emptied in the evening. The pool is encircled by a willow copse where willow stems can be picked and used in the children’s play. Butterfly bushes have been planted, along with perennial flowers which attract butterflies and other insects.

At the beginning there were some reservations about the new playground – parents said that it was dangerous with all the big stones. But the children who use it love the space. The playground has now been in existence for more than twenty years. Not one child has been seriously hurt during the years. An asymmetrical shaped design like this make children more focused on how to move the body around without falling. There are fewer conflicts in the playground, and an interesting by-product of the playground is the fact that it has stimulated a constructive debate between parents and the teachers about how far one can protect a child.

America author Susan G. Solomon writes about the playground:
“In Denmark, Helle Nebelong, the landscape architect who designed the natural play area in Valby Park, has dedicated herself to working within the framework of natural playgrounds. When she says that nature provides a way so that “children have to use their full bodies and minds to explore and manage their surroundings”, her words seem to echo scientist Adele Diamond, who declared that the best way to learn, especially for young children, is to be actively engaged in a task. “Active learning,” Nebelong writes “involves the whole body, all the senses”.

Nebelong employed her philosophy at the Murergaarden School in Copenhagen, where it blends well with the Scandinavian approach to extended socialization for young kids. She designed and completed the project in 1998. The site, having been the subject of architectural and design articles and many written treatises on nature play, has become an icon for natural playgrounds.

Nebelong teased many natural wonders from this very confined urban space in the gentrifying, but still often poor, area of Norrebro.”

(Extract from Susan G. Solomon : The Science of Play – How to Build Playgrounds That Enhance Children’s Development (University Press of New England 2014) pp 132-133)